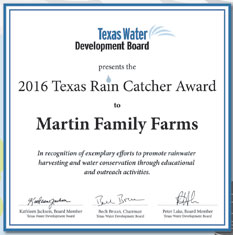 In early 2016, Martin Family Farms began making plans to build a barn to house the headquarters of their farming operation. Before construction began, a well was drilled to supply water for the barn and for filling spray rigs. When the new well only produced 2 gpm, research began to find an alternative source of water.

At the same time, the South Plains Underground Water Conservation District Board was looking for a rainwater harvesting project to cost-share. The District’s goal was to find a producer who would be willing to install a catchment system on their barn. The District began their search by coordinating with the Terry Soil & Water Conservation District Board to see if they would be interested in joining the project. Glen Martin, Martin Family Farms, serves on the TCSWD Board and became interested in a rainwater catchment system as the talks progressed.

Martin continued to research the design that would be required for his 19,469 ft.2 roof area. Glenn submitted his design and application to both Boards and both pledged to cost-share the project. The system includes 30,000 gallons of storage and has the ability to capture more than 150,000 gallons of rainwater on an average year’s rainfall. One inch of rain will potentially yield as much as 11,631 gallons of water. All of the storage tanks are plumbed together and a “first flush” system is included. This keeps dirt and debris out of the tanks. The gutters prevent erosion around the barn that would have happened without the catchment system. Since completion of the barn in May, the tanks have never been empty of rainwater.

In 2015, this large farming operation used over 200,000 gallons of water for spraying chemicals on their crops. Usually this water would come from a well and ultimately from the Ogallala. In 2016 that water came from stored rainwater. The barn also includes a wash bay so the farm’s vehicles and tractors can be washed with rainwater. The wash bay area has a drain and this water is piped down the hill and used in a low area so that even this water is not wasted.

The system is unique because it is the first rainwater catchment for farm use in Terry County. The annual Terry County Farm Tour made a stop there in September, and since that time there has been interest shown by other producers. It is also unique because of the partnership between the producer and the two entities that joined in the consulting, design and cost-share.

Martin Family Farms have benefitted from their new system. During 2016, approximately 40,000-50,000 gallons of rainwater was utilized. Fewer chemicals can be used when spraying their crops because of the near-neutral rainwater. West Texas never receives enough rain, so they are proud to capture and use every drop that they can. They hope that other producers see this as an additional water supply.