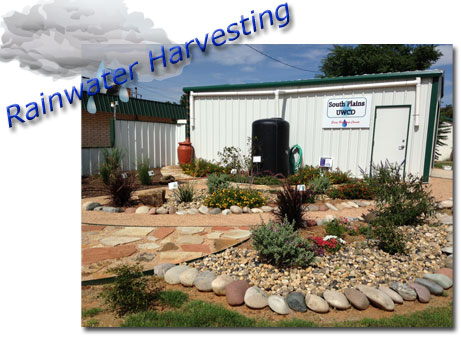 Rainwater harvesting was a common method of providing water for many of the first settlers in Texas. At that time, most rainwater was captured in cisterns. As its name implies, roof-based rainwater harvesting refers to the collection of rainwater runoff from roof surfaces. Captured rainwater is most often used for landscape irrigation, although, some systems are designed to treat the rainwater so that it can be used for drinking purposes inside the home.

The District’s rainwater harvesting system was installed in 2014. This system consists of two 550-gallon storage tanks. The roof area of the barn is 608 square feet. Approximately 365 gallons of rainwater can be captured from a 1″ rainfall event. The average annual rainfall for our area is 17.5″.

A notable feature of the District’s system is the first-flush pipe. The first water to come off the roof fills this pipe. This is how dirt and other contaminants are cleared from the roof. When this pipe is full, the clean water goes into the storage tanks.

At the time the District installed the rainwater harvesting system, the xeriscape garden was also created. The garden contains plants which use less water. Once the plants were established, they have been watered almost entirely with the stored rainwater. The garden, which also has a pollinator house, has become a beautiful sanctuary for bees and butterflies.